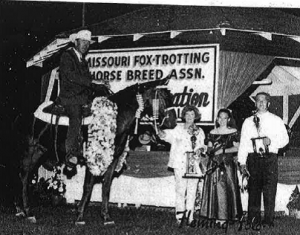 Jack’s Smooth Operator was sired by Sensation’s Mr. Jack, his dam was a Red Rawhide mare.

I bought “Smoothie” at the three year old futurity this spring, as I was without a horse to show.   My Playboy horse had fallen apart trying to learn how canter and my two year old colt was too small or I was too big. The night before the futurity, Cliff Matlock rode Smoothie into the arena. I had liked the horse the year before, but I was really impressed when I saw him.   He had gotten a lot better. That’s not to say he was not a good horse last year, as he was the 1990 two year old Stud and Gelding Champion, with straight across first.

The man that deserves the credit on this horse is Cliff Matlock, as he set him up. Cliff is probably the most underrated trainer in our breed. The work he is doing now will soon bring him the respect he deserves.

I also want to thank Jim and Shelby Hufft for selling me the horse. Jim said one of the reasons for selling the horse to me was that he knew I would show him, and that’s what we did: From June thru the Celebration we showed him in 25 classes and had 22 first place wins; 2 second, and 1 third. A lot of these classes were open or senior amateur class.

The great thing about Fox Trot people, is outside the ring we are friends and try to help each other. When we enter the arena it is tough competition. When I won the championship, one of the competitor’s daughter greeted me with a hug and congratulations at the gate. Melody Strumph gave me a lesson in sportsmanship that I will never forget. I also want to thank Geno Middleton for fine tuning “Smoothie” and teaching me how to ride him.

We have been very fortunate to have had Missouri Chief in 1989, Playboy’s Reflection in 1990 and Smooth Operator in 1991. I have had Fox Trotters all my life but I was blessed with all the good ones the last three years. I really feel that “Smoothie” is as good a horse as I could ask for. He suits me in most ways and I am Iooking forward to riding him next year; and seeing if he continues to improve with age as I feel he will.

Pat and I want to thank each one of you for your friendship. As important as horses are to us, the friendship is what this is all about We hope to see you all at the first show next Spring.