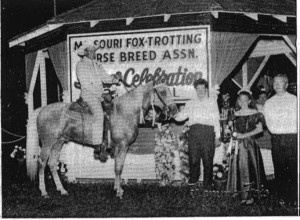 The Midas Touch is a 2 year old stallion by World Grand Champion Rex’s Golden Touch and out of show mare Fanny Mae. He was foaled June 14 at the Wood’s Maple Leaf Stables. He was broke to lead and shown as a foal by my wife Debbie. We broke him to ride last fall. In December we took him down to Steve Dampier for him to see. He showed interest in him, so we took him back in March for him to train as an amateur horse for us. As it turned out, Steve showed him in the 2 Year Old Futurity where he tied 3rd in the Grand Champion stake.

After the futurity I started showing him. We were crowned Jr. Grand Champion at Union, Mo. and the 2 Year Old Amateur Grand Champion at the Mid America Show. That was one of my most exciting wins being I’ve showed ·for 16 years and that was my first garland. Alos when I won the Amateur Stallion class; that was my 1st Celebration win.

I feel the amateur classes at the Celebration were really popular and really tough to place in. Some classes had as many as 30 horses in them. I’m really glad to see all the interest.       ·

Dad and Mom started showing in the early 70’s. Dad won the 1975 World Champion 2 Year Old Mare Model Class with Miss Serena. She was the 1st show horse they raised. I started showing in ’76. I owe so much to Dad for helping me over the years. Other than Midas, we have always trained our own horses and have a lot of trophies and ribbons to show for it.

In 1987 I married Debra Wilson. She is very good with the horses. She has a lot more patience with them than I do. She only got to show Midas once this year that in the Ladies 2 Year Old Class at Ava where they tied 3rd. I was really proud of her.

We want to thank Steve and Tracy Dampier, Leo and Mary Martin and everybody who supported us during the year. I still get goose bumps thinking about it. We look forward to seeing everybody next year. Thanks again.