Kenny Morrison was part of the inaugural class inducted into the MFTHBA Hall of Fame.

MFTHBA Hall of Fame member, Kenny Morrison, will be celebrating his 90th Birthday this February.  Mr. Morrison’s family will be hosting a special birthday celebration on Saturday, February 15, in Ozark, Missouri.  The birthday celebration will be held at the OC (1530 W Jackson, Ozark, Missouri) from 2 to 4 p.m.  MFTHBA members are encouraged to stop by to visit with Mr. Morrison.

Born on a farm in Missouri on February 14, 1930, was not an easy beginning, but for this man, it surely was where his commitment to family and community began.  Attending all 12 years of school at Humansville provided educational and athletic memories that have lasted a lifetime.

After graduating in the spring of 1948, Kenny operated a milk route and began building a dairy herd and farming operation that would provide for his future family.  In September 1949, he and Martha Andrews were married and started their lives together. This union resulted in four children:  Donna (Jim) Huffman, Kenny Paul (Helene), Debbie Murray and Dennis (Nancy).  Kenny is proud “Papa” to nine grandchildren and 12 great-grandchildren.   Sadly, Martha lost her battle with cancer in April 2009.  They would have celebrated 60 years of marriage that fall. 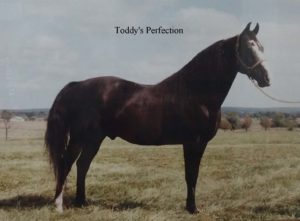 To make a living and provide for his family, Kenny had many different agriculture-related talents that kept him in demand.  Besides dairying, acting as an order buyer for dairy heifers and later raising beef cattle, he custom baled hay all over Polk and adjoining counties long before air-conditioned tractors were the norm.  His expertise with saddle horses soon had him in demand for shoeing and training not only the family’s horses but also for the public.  Over the years, he stood many stallions for public service and sold the offspring produced by the family’s broodmares.  His early involvement with the Missouri Fox Trotting Horse Breed Association was with the purchase of 6 registered mares. One of those mares was Waldren’s Golden Nellie (Goldie) a double granddaughter of Golden Governor.  In 1969 Kenny had seen a beautiful, black roan stallion at a horse show.  That horse was Gile’s Hot Toddy owned by Mr. Glen Giles of Farmington, Arkansas. The next year Goldie was bred to Hot Toddy.  The result was Toddy’s Perfection one of the most successful breeding stallions in the Fox Trot industry.  Perfection’s offspring were not only beautiful but smart and they had that natural “fox trot” rhythm.  His progeny was sought after not only for their disposition and smooth gait as trail horses but also as model and performance show horses.  Kenny’s reputation for fairness and honesty made possible sales of horses to hundreds of satisfied customers, many of whom became lifelong friends.  It was a common occurrence that once he sold someone a horse because it was exactly as he had described, customers would call him up on the phone, describe what they were looking for, and after he searched and found what they wanted the deal would be made “sight unseen.”  Kenny’s word is his bond.

The Family of Kenny Morrison invite MFTHBA members to join them in celebrating his 90th Birthday.

In 1998 Kenny received the honor of induction into the inaugural class of the Missouri Fox Trotting Horse Breed Association Hall of Fame.  This accolade is for his many contributions to the Association in the show ring, as an advisor and for his promotion of the breed and all it represents.  Kenny’s first attendance at the Championships in the late 1960s began a lifelong participation in every aspect of the Missouri Fox Trotter.  Whether it was helping new people purchase their first Fox Trotter, participating in clinics, standing stallions or helping to promote the breed by selling quality horses from coast to coast, his honesty and strength of character were always first and foremost. 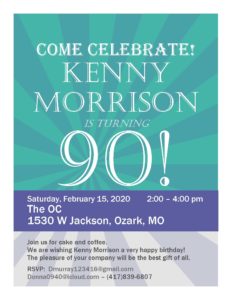