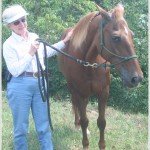 Harriet Cooksey and Millie wanted to “show at the Celebration one last time.”  Photo: Jody Styron

Watching Harriet Cooksey, age 77, ride in the 2014 Celebration on her 16-year-old mare, Willys Princess, was cause for joy. Harriet and “Milly,” whose combined age is 93 years, placed respectably in all their classes, including their final one, the Amateur Owned 5 & Older World Grand Championship class. It took some doing for Harriet and Milly to make it to Ava from their home in Sarasota, Florida, but it was something Harriet wanted. “I had to show at the Celebration just one more time,” she said. Moments like this made the Celebration unforgettable.

The kick-off for the Celebration, the MFTHBA Member Cookout, was just the start of a week full of fun activity. Along with the traditional Gospel sing, a new music venue was started: Karaoke! Several show participants (including some trainers) proved that they can sing just as well as they ride.

The Hall of Fame Induction reception and ceremony are always memorable. This year’s inductees were Don and Carol Cunningham, Linda Shaddy, and Tom Owen, as well as equines Missouri’s Charming Princess M, Southern Sunrise, and The Kansas Kowboy D. Anyone who was at the outside ceremony on Saturday night will remember when, at the mention of his name, “Kowboy” playfully reared up. What a showman!

Cheri Barr of East Wenatchee, WA, and Tasha Sunrise easily make it through the “noodles” at the Trail Obstacle Course.  Photo: Jody Styron

Those wishing to attend the MFTHBA Trail Rides were able to ride at such beautiful places as Bateman Ranch, while Trail Obstacle riders pitted their skills against some new obstacles, such as the colorful, scary-looking “noodles.” John Brandreth and JBs Raising The Bar ended up as the Open Amateur champions; Isabella Brandreth and Rio’s Cloudd Moon were the Youth Champions.

Sally Scott and A Thrill a Minute pull a tire for a class. They were named the Open Hi-Point Working Horse.  Photo: Jody Styron

Performance and Model classes at the Celebration show off the best of our breed in the front arena. This year’s Open 5 Years and Older WGC was the ever-popular Legend’s Wendy, ridden by Steve Dampier for Larry and Linda Kilroy. Kolbey Ballowe, riding Cerra Sunrise, was the Youth 11 and Under WGC; King’s Special Sensation and Keeli Land were the Youth 12-14 WGCs; and Kassidy Landon, with Playboy’s Southern Belle, was named Youth 15-17 WGC. Grand Central, winner of multiple World Grand Championships in Performance, changed venues and won the Open Model WGC for senior stallions and geldings.

The most touching moment of the 2014 Celebration involved Dallin Story. When Dallin’s horse died just prior to the start of the Celebration, MFTHBA members worked together to bury the horse on the show grounds and find a suitable horse for Dallin to show. Amy and Shawn Stangl offered Amy’s show horse for Dallin to ride, and trainer Mark Holifield rode by Dallin’s side, coaching him, during some of his classes. With this help, Dallin was able to qualify for two championship classes. Dallin, Stangl, and Holifield were all honored on Friday night at the Celebration. “From this tragedy came a wonderful story illustrating the best of our membership,” said MFTHBA President Dr. Joyce Graening.

As for Harriet Cooksey, she was amazed to find her husband Edwin, who had secretly flown up to watch her ride, waiting for her at the exit gate of her first class. Moments like these made the 2014 Celebration unforgettable.