On what turned out to be a most entertaining and comfortable evening, YANKEE’S WHISPERING HOPE, a very pretty five-year-old, owned by Carrol and Virginia Counts of New Orleans, Louisiana, and ridden by Billy Johnson of Rogersville. Missouri, made her way ‘round the ring .to claim the 1981 World Champion Missouri Fox Trotting Championship title.

Not any less entertaining and exciting was Friday night, when Barb Schenewerk of Russellville, Missouri rode her working little mare, SECRETS MIDNIGHT LADY, to top honors in the Ladies’ Stake Class.  Splinter Middleton also went to number one on LAD’S COOL DUDE, a promising five-year-old owned by Clark Gibbs of Salem, Missouri.

In other model competition during the week. YANKEE’S FANCY FILLY B. owned and shown by Florine Barham of Bolivar, Missouri, came back to zero in and capture the Yearling Futurity Class, while .E.  W. Quessenberry of Republic, Missouri and  his filly,  APRIL STAR Q., modelled their way to number one in the 1981 Foal Futurity Class.

Then in the 1981 Foal stake Class, MISSOURI’S MISSY C., owned and shown by Carol Cunningham, Ava, Missouri, made her debut which wasn’t bad, first time out and first place; not having enough of the limelight Missy then strutted her stuff alongside        mother PRINCESS JOY, to take another first in the Mare and Foal Class. ACE’S SEVEN SPOT. owned and shown by Franklin Hightower, Grovespring, Missouri, opened up Tuesday evening’s program by taking first in the Yearling Model competition, crowding out thirty-three other entries; this is believed  to have been the largest number of entries ever in a Show and Celebration yearling class.

A complete fasting of all forty seven class winners and the respective scoring of each class is contained farther on in this edition of the ‘Journal”. A large show and many winners certainly makes for a lot of happy people. Even those who didn’t win, or didn’t even show, enjoyed visiting the Hall of Fame Center and vendors’ displays, eating in the Ava Lions’ Club lunchroom, watching all the “just for fun” riding  around the showgrounds as well as getting in and around the area for sightseeing and shopping.   .

This year’s show started off a day early. on Labor Day; an extra day was added to the show program because of the increasing number of two-year-olds entered in the show, these warranted additional  rounds.  The system used in determining evidently did not prove out satisfactory as some classes were larger than others. To alleviate this from happening next year, two-year-olds will be required to pre-enter by noon on Monday (or the first day of the show) and then classes will be drawn.

Even the delay Tuesday evening during the Open Youth Class.(during which an unjustified protest of two-year-old being shown in this class had to be proven false) did not dampen the spirits of the crowds and participants.        .  •    . •

During the Show, federal and state inspectors arrived to check the out-of-state horses for the coggins’ test; this is standard procedure and anyone bringing a horse to future Celebrations should stand advised that coggins’ may be checked.

Mrs. Gean Cagle, recorded steward with the American Horse Show Association did an admirable job of overseeing general show conduct during the six-day show. Larry Baker of Cabool, Missouri  and J. R. Jones of Cole Camp, Missouri, both licensed through the MFTHBA DQP Program checked a lot of horses during the week and the general condition of the horses entered in the show was good. 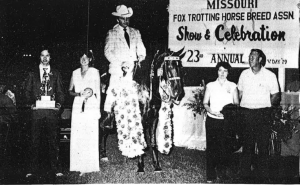 Carol and Virginia Counts are pictured at right. Greg Taylor is holding the Grand Champion trophy and Miss Barbara Christensen is the ribbon girl.