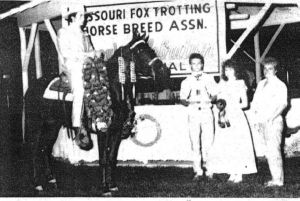 The 1987 Three Year Old Futurity Champion is Missouri’s Bobbie Sue, a sorrel mare out of Missouri Traveler E., by Zane Grey and Rox Ann by Mack K’s Yankee owned by Linda Juette of Quincy, Illinois and ridden by Geno Middleton of Nixa, Missouri.

Doc Juette had talked to the infamous trainer Jerry Middleton, about helping him find a good horse that Linda could handle. It had to be a dark sorrel, good enough to win the Celebration’s Amateur Division, and it had to be cheap. Without distorting that blank stare, nor batting his eye the slightest bit, Middleton responded, “Male or female?” Caught off guard the doctor said, “I ah, ah, I think she would like a dark sorrel horse like the Gypsy Rose Lee horse she rode.” There was a long pause; as the mind­ boggling master turned, breaking that emotionless stare into space, “Right!” Then came a short pause, followed by “A good horse, is the cheapest horse you can buy.”

A couple of weeks had lapsed when the phone rang in the Land of Lincoln. “Jerry D. here, when will you’ens be down?” Doc Juette stammered around for awhile before he could sound out the words, “Well, I guess this coming weekend.” “See ya then.” “No more information,” Linda asked hopefully? “Hum, I wanted him to help us find a horse, so I suppose that’s why he called, we’ll find out when we get there.”

March 27th, “Doc” and Linda Juette brought the much-needed rain clouds with them as they pulled in the white graveled lane, with a hand-carved wooden sign boasting “Middleton Stables.” As the Juettes entered the barn they were met by Geno Middleton; who was working a horse. A big smiling grin spread across his face that soon broke out into a soft chuckle. “Well, you’re here and it’s raining again.” It seems that every time the Juettes come to Springfield, it rains.

After a Jong trip from Quincy, Illinois, Linda was more than ready to look at horses; after all that’s why she was there. Linda’s anxiety got the best of her. “O.K. Geno, put your horse up and show me the horse that I’m supposed to look at.” Geno said, “Better wait for Dad; I’m not sure which one he has in mind. That answer wasn’t good enough for Linda. “Geno, if you don’t know which one it is, just show me the best horse you got here and we’ll start there. With a warm, shy taunting grin, Geno said, “Charm’s out on pasture; she’s about ready to foal.” Spontaneous tantrum occurred.   After stamping her feet, scratching the ground, and squawking like a wet hen, she said “Geno! Quit messing with me!” After all the noise had stopped, Geno put his mount in cross ties. Laughingly, he said, “I think he was talking. about you’ens looking at Splinter’s three year old futurity mare, Missouri’s Lady Love.” Linda said, “Yuck, that name has got to go.” Geno walked to stall number five. With a lead rope in place, Geno led an already head shaking dark sorrel to the cross tie. “Is she good, is she gentle, can I handle her, will she be good enough to show around here?” Throwing a wink and grinning from ear to ear, Geno said, “Better ask Pop.” “Oh, Geno , why don’t you just tell me.” After two laps around the barn, he didn’t have to say any more. “O.K., Geno, how much?” “Better ask Pop.”

Later that evening Jerry walked through the door. His feet hardly hit the training turf when he was bombarded by questions. “What’s the mare’s breeding, who’s the daddy, will she be a good mare, can I ride her?” After many more questions and a long period of riding the mare, the price negotiations had started. Bargaining had went into the late hours when Linda decided that she needed to sleep on it. That was simply a figure of speech. All night long Linda tossed, turned and wore out two bed sheets. Early that morning her only conclusion was she couldn’t and Middleton wasn’t going to sleep either. She dialed the phone in rampant rage, mumbling to herself all the while the connection was being made. Finally she blurted out,” Jerry! Meet me at Shoney’s for coffee in 30 minutes.” Immediately Linda jumped up and grabbed her bag of cosmetic tricks, she stared the impossible task of covering the signs of the sleepless night.

The coffee break was over and Linda was at the barn riding the filly out of Missouri Traveler and the Rox Ann mare. She rode for some time, still her mind could not be made up. Jerry said, “She’s easy to ride, she’s in the futurity and you could show her yourself and win back some money.” Linda and John deliberated for a long time, reasoning back and forth. Finally Linda said, “If I have trouble with the mare will you let me bring her back and help me out?” “When people buy a horse from me, I’m more than glad to help them out with any problem they may have.” “What more could you ask,” thought Linda, “I’ll take her.” Five minutes later the Juettes were heading home and Linda said, “I want to change the horse’s name.” “I like Missouri’s Bobbie Sue, just like the song.” When Linda sent the papers in for ownership transfer she requested a name change from Missouri’s Lady Love to Missouri’s Bobbie Sue, and the name change was granted.

Friday night when Rondo announced the 1987 winner, of the Three -Year-Old Futurity mares, it was Missouri’s Bobbie Sue that rode to the winner’s circle. Suddenly a loud scream was heard and there was a commotion on the west end of the arena. No, there was not fight, it was just Linda telling the surrounding area, Gainesville to Lebanon, that was her horse. Doctor John was seen picking himself off the ground, looking like he was trampled by a team of wild horses. Dusting himself off, he leaned over to Linda and said, “Say little girl; I think they got the message,” limping out of the box seat, dragging his hind leg, and licking his wounds, like a dog who had lost all three rounds. Juette told a spectator, “I don’t know if I could stand for her horse- to win another round.”

Saturday came none too soon for Linda. All day people would say, “Linda, you’ve got a good mare, good luck. I think you’ens can win it.” By show time Linda was frustrated with excitement. “I hope all those people know what they’re talking about,” was Linda’s remarks before the show.

Well, the time had come, the horses had been shown, stripped, re-saddled and the judges cards were handed in. Linda was wringing her hands, tapping her feet, squirming around in her seat, when she blurted out, “What’s taking so long?” Doctor John said, in a joking tone, “It’s been all of 20 seconds since Rondo announced the score cards had been handed in.” By this time Linda was near hyperventilation. “Man, I wish they would hurry up,” The surrounding crowd was laughing at this women with a neurotic disorder. Things became tense, the Doctor was in trouble. Win, lose or draw, he was in for another whipping. When this emotional lady turned her head for a second, John slithered from the box seat to behind the bleachers. “Chicken, chicken,” was the remarks from John’s so-called friends. John was quoted as saying, “If her horse should happen to win, I know what would be in store for me. I’ll let her beat around on that chair for a while. By the time she gets back here, maybe she’ll be wore out.”

Rondo broke the waiting period with, “The 1987 Futurity Champion is # 112 Missouri’s Bobbie Sue, ridden by Geno Middleton and owned by Linda Juette of Quincy, Illinois.” Linda had done cleared the iron railing and was well on her way to center ring, by the time Rondo had finished his announcements. The rest is history, Bobbie Sue won and Linda is just as happy as if she had good sense.

Linda wanted to thank everybody for their help and support. The list of name would be too long for the paper to print, but “THANK YOU again,” said Linda.