From the March 1990 Journal 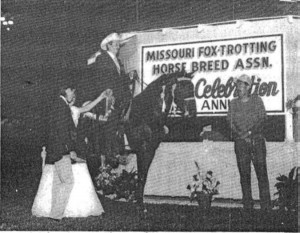 The first time I saw Playboy’s Reflection, he was a six month old colt. He was best described as big and ugly, yet he moved with exceptional reach and no knee action. I asked Clyde Connelly if he would sell the colt. He responded with a “yes” if he could ride him through the Two Year Old Futurity. We made an agreement and I became the new owner. Playboy’s Reflection seemed to grow one part of his body at a time; but it all came together about the time he turned two. Clyde showed Playboy’s Reflection at the Futurity arid finished sixth in the slake class.

At that time I asked Clyde to finish the show season Playboy’s Reflection won several shows including the Ava Spring Show and the Stud and Geldings Class at the Fall Mid-America Show. The final night of the show, I got a special thrill. I didn’t get to watch the class he was competing in, as I was getting my horse ready. I was showing in the amateur class.

As I waited in the warm-up area, they called the winner, the second place horse, then third, which was Clyde and Playboy’s Reflection. The applauding and cheering were so loud I couldn’t hear the announcement of the fourth and fifth place horses. This meant a lot to me, as my horses have not always been well received. Of course, a victory at the Celebration at Ava is always the greatest thrill in the Fox Trot world.

I plan to ride Playboy’s Reflection in the amateur class in the upcoming show season. I wish show season started tomorrow, as I really enjoy showing.

Pat, my bride of 26 years, is one of those special women that supports her husband in everything he does. We have one daughter, LeAnn, who tolerates horses, but likes cats and dogs more. She is attending college and plans to be a teacher.

Because of our horses, we now have friends from Illinois to California, Kansas to Texas. What could be better than good friends and good horses? I look forward to seeing everyone at the upcoming shows. We appreciate the support for Playboy’s Reflection.

From the March 1990 Journal