From the February 1988 Journal 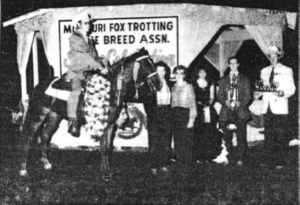 Sensation’s Di was foaled May 13, 1985, at our home near Willard, Missouri. As we watched Di grow and develop, we could tell she had Sensation’s style and disposition. We had hopes that she could be a contender for the Mid-America Two Year Old Futurity.

When I started breaking Di in January of 1987, I could tell she had lots of stride and head shake. After many days and nights of riding and training, the Two Year Old Futurity came.

I won my preliminary class and went on to win fourth place in the stake class, which started Di’s show career. She was shown and placed over twenty times during the 1987 show season. She won several blues, as well as two stake classes, prior to the Celebration. The two stakes were at the American All Fox Trotting Show and the Buffalo Fox Trot Show. We feel to promote the Fox Trotting Breed, you must support all shows, the big as well as the small.

Janet, our daughter, wanted to show so I consented to let her show Di. She showed in the Open Ladies Classes throughout the season and usually placed second behind Sissy and Judy Middleton. At the Celebration, she won first place in the Two Year Old Ladies’ Class.

I learned about Fox Trotters after marrying my wife, Ramona. Her father, Raymond Crier, taught me about training and riding the Fox Trotter. Ramona and I started showing in 1972. Each year we have worked at improving our skills of showing. Janet began her showing career, at the age of 11 in the Youth Classes. She now has worked her way into the Ladies’ Classes.

We enjoy showing horses as a family and believe the Amateur Classes have given us a place to compete and show with those that do it as a hobby. We like it better when we don’t have to compete with the professionals.

Winning the Two Year Old World Grand Champion Stake Class was a rewarding experience. After many hours of hard work and training, a dream came true. We would like to thank our coaches and supporters for making 1987 a year to remember. We hope to have your support again during the 1988 show season.

From the February 1988 Journal