“You don’t just go out and do this with a young horse like this,” said Brandreth, of Canton, Georgia. “It takes a while. And, there’s no way I could do this without my trainer, Tori Blankenship. Tori tells me how to do this, and I pay attention.” 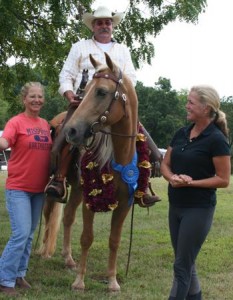 “I’m the translator,” Blankenship laughed. “I figure out what the horse likes and how to pass that information on to John. The plan was to start ‘Bar’ slowly. When Bar was ready, we got him into the Boss Man Futurity as a three-year-old, and he won the Open Champion Western Pleasure Horse that year. He was a young horse to do all that,” said Blankenship, of Blankenship Stables in Sarasota Florida.

After being shown minimally as a three-year-old, Bar, who is by Southern Playboy and out of Charm’s Missouri Queen M, spent the next two years with Brandreth, going on a cattle drive, working cattle, trail riding the mountains of northern Georgia and “all kinds of stuff. He got to be a real horse,” said Brandreth.

“Activities like this keep their brain healthy,” said Blankenship. “Start with basic groundwork. Then give them time to be a horse–go outside the box. If you do their training slowly and gradually, that training is always going to be there. It’s a true foundation.”

“We don’t work in the arena as much as we do in the hills,” said Brandreth. “My daughter Isabella and I go on 22-mile trail rides in the mountains, and it keeps our horses physically fit. If a horse works on the flat all the time, he doesn’t build the muscle mass needed to do what you want him to do. Riding in the mountains builds horses up and gives them endurance.

“If you think Bar will be outstanding as a five-year-old, he will be phenomenal as a 12-year-old. We’re not in a hurry,” said Brandreth. “We go for the longevity.”